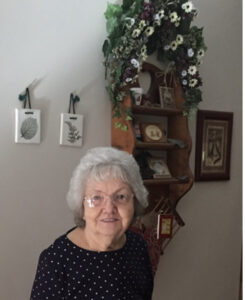 Olive Jeanne Blevins, 87, of Catlettsburg, KY, passed away Monday, November 16, 2020 at the Emogene Dolin Jones Hospice House. The funeral service will be conducted at 12:30 pm Saturday, November 21, 2020 at the Kenova Church of God where she was a member. Reverend Paul Cantrell of Kenova and Reverend Joe Wayman of Wayne will be officiating. Interment will follow at Spring Valley Memory Gardens. Jeanne was born December 18, 1932 in Logan, WV, and was the daughter of the late Brice and Della McCoy Hall. In addition to her parents, she was preceded in death by three siblings; Juanita Sue Pennington, Anna Jo Golice and James Hall, 1 great grand-daughter, Hanna Stanley and her mother-in-law, Ova Blevins Plummer. Jeanne worked as a switchboard operator at Logan’s Mercy General Hospital where she met the love of her life and future husband, Alvin. She is survived by her beloved husband of nearly 71 years, Alvin Baxter Blevins, daughter Sherry Russell, and son, B. Ray Blevins (Ann). Two grandchildren from her daughter Sherry; Sherry Beth Copley (Jay) and Amanda Compton (Kyle); and 5 great-grandchildren; Justin Ellis (Autumn), Mallory Copley, Jaelyn Copley, Luke Durham, and Kylie Compton. Five grandchildren from her son B. Ray; Anisha Thomas, Shane Blevins (Dorothy), Cory Blevins, Amber Blevins, and Maggie Jean McDaniel (Cory); 11 great-grandchildren from her son, B. Ray; Coral McCaskey (Joseph), Logan Thomas, Wade Thomas, Leslie Terry, April DeLoach (Walt), Rowan Smyley, Michael Blevins (Jordan), Kelsie Blevins, Christopher Nettles , Vance Nettles and Bradley Nettles ; and 5 great-great grandchildren: Isaac and Emily McCaskey, Oliver Blevins, Lexy and Walton DeLoach. She is also survived by two brothers; Orison Hall, and David Hall (Melissa), and a host of nephews and nieces including beloved niece, Debbie Hall Phifer. Jeanne’s heart was one full of love and nurturing which was always felt, whether by word or deed, by those that were entrusted to her care. She is lovingly remembered for always singing around the house. We all can remember hearing her say so many times that “my arms just ache to hold a baby!” Her favorite bible scripture was Psalm 121, which she often quoted. She loved her Lord Jesus Christ and she loved her family. Definitely a unique combination of both Martha and Mary of the Bible, she will be greatly missed until we see her again in the Lord Jesus’ presence in Heaven.