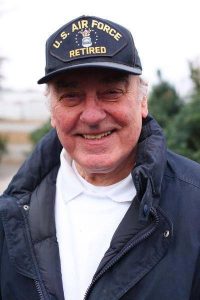 GEORGE BLASS MORRONE JR., 87, of Huntington, W.Va., departed this life at his residence on July 10, 2020. He was born in the Bronx, New York City, New York, the second of three children of George Blass Morrone Sr. and Evelyn Jacklish Morrone. He graduated from Theodore Roosevelt High School and enlisted in the United States Air Force at the age of seventeen. Several weeks before completing his basic training in San Antonio, Texas, he was deployed to serve in the Korean War. He later served in the Vietnam War as well. During his nearly 22 years of military service, he flew 362 missions and his aircraft was hit only once. On January 29, 1960, he married Barbara Jean Perry of Kenova. He retired from the USAF in 1972, as Master Sergeant/E-7, and they returned to Ceredo to raise their children. He then worked as a private pilot and flight instructor for more than forty years, initially as co-owner of C-K Aviation. He was an avid supporter of youth and high school sports in the Ceredo-Kenova area, serving as the videographer for the football team, the unofficial photographer for all sports teams, and as a baseball and softball umpire whenever the need arose. It was of no surprise to anyone that he routinely volunteered to fly the Wonders’ coaching staff across the state to scout an upcoming opponent or to attend an early morning WVSSAC football playoff meeting in Parkersburg after a Friday night win. He was instrumental in procuring the financing for new lights for the Ceredo-Kenova High School football stadium in the early 1980s and he even flew to Minneapolis, Minnesota to pick up the lights. He was an usher at St. Joseph Catholic Church in Huntington. He was a Member of the Knights of Columbus. He was a member of the American Legion Post 93 in Kenova. He was a past member of the Ceredo Crescent Masonic Lodge 32 AF&AM. He was preceded in death by his parents and two sisters, Virginia (“Ginger”) Morrone Hopkins and Catherine Morrone Howard. He is survived by eight children: three daughters – Jeanie Morrone Sullivan of Ceredo, W.Va., Cyndi Morrone Ranson (Mike) of Charleston, W.Va., and Cathy Morrone of Tampa, Fla.; and five sons – Perry Morrone (Lisa) of Kenova, W.Va., Ric Morrone of Kenova, W.Va., George Blass (“Trey”) Morrone III (Heather) of Kenova, W.Va., David Morrone (Becky) of Milton, W.Va., and George Bob (“Junior”) Morrone of Arlington, Texas. He is also survived by 12 grandchildren – Braxton Sullivan, Karleigh Morrone, Jace Ranson, Payton Morrone, Giorgi Morrone, Kane Morrone, Brandon Morrone, Blass Morrone, Cole Salmons (Catherine), Jordan Nelson (J.T.), Jason Morrone (Jennifer) and Shawn Marie Hoodless. He is also survived by five greatgrandchildren – Liam Nelson, Charli Nelson, Macy Morrone, Brooke Morrone and Jagger Bayliff. In lieu of flowers, the family requests donations be made to CKES, c/o Rhonda Billups, 1 Wonder Lane, Kenova, WV 25530, noting in the memo – “Field Lights – George Morrone.” Visitation will be on Wednesday from 4:30 to 6:30 p.m. and the funeral service at 6:30 p.m., at Rollins Funeral Home in Kenova. Burial follows in Hillcrest Cemetery, Kenova, West Virginia.